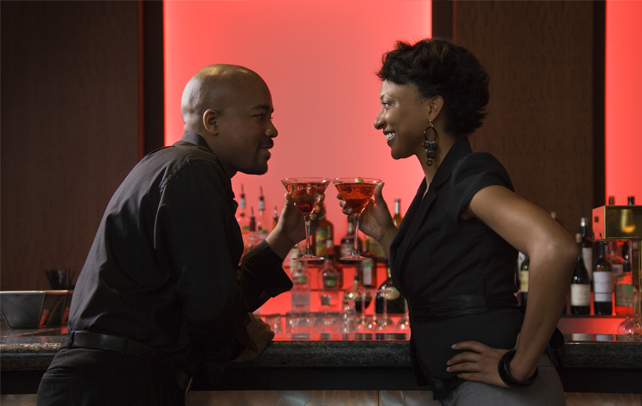 If it was so easy to understand and talk to every other person in the same manner, there would have been no need of communication tips; but the reality is far different. We come across a large number of persons throughout the day who are embraced with different characteristics and traits. Somehow, it’s easy to get an insight into the personality of the person belonging to same sex as ours, but when it comes to understanding and conversing with the opposite sex, most of us need to give a second thought about how to start, what to talk about, and when to make the first move. Irrespective of the sex, almost everyone finds it difficult to build a strong communication at one or the other level. This article is exclusively designed for the fairer sex and endows them with tips on how to talk to a guy. Have a look over the next section and become an expert in wooing guys around you.

Keep Smiling Smiling face is a big opener even between strangers. Whether you are talking to the guy for the first time or the two of you have already shared good time together, make sure that you have a smile on your face, making it the prettiest face he ever saw. An absence of smile may also signal him that there is something wrong with you about which he would keep on wondering.

Build Good Sense of Humour Guys like people full of fun and humour. Be the one who has a good sense of humour with an ability to get his jokes, laugh on them, and at the same time can revert back with more punching humour. It appeals to a guy and he would always wait for a next meeting with you.

Make An Eye Contact This is considered as one of the most important aspect of complete personality. Make an eye contact when speaking to him. It conveys a message that you are confident as well as contented with yourself. It will stimulate him to take interest in you and eventually become a part of your happy life.

Don’t Be A Badmouth It’s a real turn off for guys when they see girls using abusive language or badmouthing other people behind their back. Try not to do so, as it forms a bad impression of yours in his eyes. If you talk bad about other girls, your colleague or cousins before him, he will suppose that you’ll talk in the same manner about him behind his back. So don’t badmouth at all!

Don’t Be Over Available Over availability will make him feel bored of you; so do not be over available. Before he starts to take you for granted make sure to take few steps back and let him feel an urge to be with you. It really works! Apply the same principle when he asks you out on a weekend. However crazy you are to get along with him, hold on. Tell him that you have plans at your home and that you can not afford to postpone your plans. More he misses you; more is the chance of you being in! But remember! Over avoidance will have a reverse effect too, so do take care of it too.

Compliment Him Everyone, irrespective of one’s gender likes to be embraced and appreciated. Make sincere and honest compliments when you find any aspect of his personality worth appreciation. Also provide him some space where he can share his best of abilities before you. Again, overdoing the appreciation would be considered as cheesiness and may given an impression that you want some favour from him.  So, refrain yourself from sending such messages.

Talk About His Likings It’s something which needs great hard work and research on your part. Mind it! Guys do not easily and frequently reveal about what they like most and what they dislike. Once open to you, however, they will serve you with their inner most secrets. Whatever way possible, try to know their likes and talk about them. Many a times, you would not get to know them directly. In such cases, try to observe it from his appearance or personality. For an instance, if he wears branded accessories, he is a pure brand freak and you can discuss about several brands of footwear and clothing. On the other hand, a guy using latest apps on his cell phone can be considered as technology freak and you can use your intellect to bring in a communication.

Be Cautious When He’s Serious This is what most of the girls overlook. We have suggested that you should be easygoing and humorous but hold on, you need to look at the mood of people at the other end. When he’s serious, try not to make fun of him or imitate his anger. Listen to him. This is the least that he expects from you. No advice! No lecture! No sympathy! Nothing!

Wear Elegance And Grace Depict the lady within you. Being brave, tomboyish, and daring is appreciable but a man wants you to be more of a lady in nature. Do not shout at people around you for small things and try to handle big issues with maturity. Be the one who is full of elegance, respect, and grace. The way you characterise your personality before him decides whether the person would like to carry on the conversation with you or not.

Be Yourself Last but not the least, be yourself. How long can you succeed in a relation or a conversation wearing mask of a person quite different from your original self? In short run, you might get success as an idealistic personality but you will be at loss in the long run when your true nature will be known to him unintentionally.

Above tips can be seen as a big help when used appropriately. Implement them in your lifestyle and see the difference when you pull guys towards you as magnet.