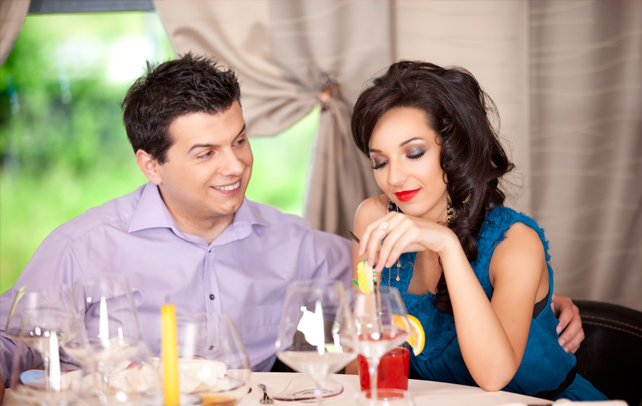 The best way to find answer to your rising curiosity is to question, but many a times you are not in a situation to ask or you are not sure that the right answer will come your way in order to feed your inquisitiveness. Like in the case of the guys, if you want to ascertain their interest about you, you can never rely on their words. They may say a ‘yes’ just for the sake of it and may also say a ‘no’ out of shyness. Secondly, it would also seem awkward if you ask them straight away, ‘Do you like me?’ Since everything cannot be verbalized and every verbalized feeling is not genuine, you need to take help of some signs and clues to find if the other person has a soft corner for you. Most of the times, guys reflect signals that display an element of interest. The next section throws light on signs which indicate that the guy is interested in you!

Body Language Body language is a very important aspect to observe. If he’s standing/sitting with you with shoulders bent towards you then surely he has certain place in his life for you. Observe if he’s looking at you more often, smiling and accepting you, your intelligence, and beauty through his body language. It suggests that he cares for you and that you are his dream girl with whom he wants to spend rest of his life.

Observe His Touches Guys usually make two kinds of touches. The first one is very usual for most of them which they make in order to flirt with almost every girl they talk to. Second one is wrapped in more affection, care, and warmth than the former one. This touch means he cares and loves you a lot. You can judge it when he subconsciously puts his hand at your arm while laughing at your jokes. Also, he may put his arm at your back in order to show you the way. These signs also include hugging you often for small things.

His Eyes Are Fixed On You Have you noticed his eyes fixed at you many times? Yes! Indeed a big sign of his liking! If the guy is shy in nature, he’ll instantly take his eyes away from you with a feeling of embarrassment which is visible at his face. Also, observe his eyes when you are in a group. If his eyes are noticing your response to what others are saying, it gives clues about his positive feelings.

Attempts To Grab Your Attention If he tries to get noticed by you now and then, it’s something he does not do for everyone. When he is in his friends’ company then he may try to keep himself a bit away from them in order to keep himself alone. See if he goes out of his comfort zone to make things easy for you; you have made an impact on him and he’s fully impressed by your personality.

Is He Nervous…? If he continues to display nervousness before you, given that he doesn’t feel the same with others then probably he’s in love with you. His nervousness can be seen in the way he laughs, breathes deeply, gets sweaty palms and becomes restless as he sees you. These all are good signs of his being pulled by the force of your attraction. They also reveal how concerned he’s about not making single mistake to fall in your bad books.

Observe His Friends His friend circle can be a very good source of authentic information about his feelings for you. There also, you are not supposed to ask them directly about it. Observe his friends’ body language and statements when you are around them. If they tease the guy a lot about you, there is something fishy for sure.

Inclination Towards Your Likings When a guy starts associating his likings with yours then he’s definitely into you. Observe his opinions on your favourites. He finds your choices good and appreciates them, thus making an extra effort to make them his favourites. It’s not a usual activity that guys do for every other person around them. For example, tell him few lines of a song you like, and soon he will keep it at the top of his play list.

Love always finds its way by getting expressed in one or the other way. It’s only up to us when we identify its flow. Hope that the above clues and signs will help you eliminate the dilemma and find the right guy interested in you.