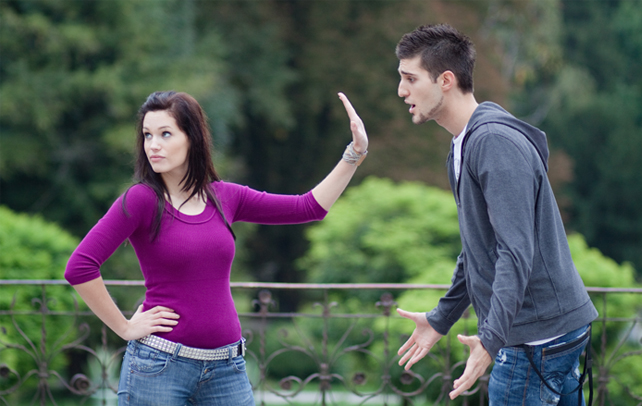 Your lover took you for granted, demeaned your self-esteem and cared a damn about how you felt—and you thought it was fine all this while. Wake up, and instil in yourself a splodge of self-worth, for no person in the world has the right to hurt you. If you can’t retort back or be as harsh as he/she was, at least ignore the person publicly to let him/her know that you are hurt and have your own way of striking it back. Ignorance is like a sweet poison—it harms or disturbs the person concerned ceaselessly, but not explicitly. Also, it gets the message across quite appropriately. If you have been attending to his/her slightest need or requirement, it is time to sit back and ignore the same. Your simple ignorance would cast a setback and have him/her wondering as to what went wrong. It is then that realization and consciousness will draw upon the person. So, whether it is your best friend, your lover or spouse, ignore the person to make him/her realise your worth and value. To help you in the same, we have provided below some tips and advices. Adhere to them and turn the tables for good!

How To Ignore Someone You Love

Being Formal! The next time you meet him/her, don’t behave as if you have known the person since ages, even if you have. Instead, be outright formal and reserved. Passing off a meeting or an accidental bump with an ‘excuse me’ said in a monotone voice can be the topmost way to go about with it. While the best would be to stop addressing the person at all, if, by chance, you are at a crux of a situation wherein there is no way but to talk to the person, address him/her as ‘you’ or ‘Mr/Ms (Surname)’. Don’t make use of the person’s name, come what may. When you get formal with the person, he/she would get the cue that you are ignoring him/her.

Curtailed Response! Have you noticed a conversation with an unknown person is limited to a few seconds or a minute at the max, a sharp contrast to conversation with those whom you love wherein it stretches for minutes and sometimes, even hours? If you want to ignore someone you love, the best would be to curtail the responses as much as restricting to a “hello”, “hmm” and “goodbye”. In fact, it would be great if you pretend not to hear him/her or say nothing at least 50 percent of the times. Your restricted responses are sure to make the other person feel dumb and keep him/her wondering about what went wrong. When this happens, be happy about it, for this was all that you wanted.

Via Communications! If the two of you are working together or have mutual friends, it is hardly possible to ignore bumping into each other. At such situations, how do you ignore a person? Agreed, you are abided by social obligations and have to face the person, but you can ignore him/her while being around too. Don’t communicate with him/her. Instead, gel up with your friends or colleagues and use them to convey a message directly or indirectly. Confused? Don’t be, for here is a small example to sort it out for you. Suppose you and your friends are at an eatery. You get up to place the order at the counter. Don’t ask the person directly as to what he/she wants to eat. Instead, ask your friends to do so. This way, you can ignore him/her while still being around. Use people around you to send messages.

Object Overlooked! Even if you have the eyes of a chameleon, a full 360 degree field of vision, rest them when that person is around. Don’t take us literally and close your eyes every time you chance upon him/her. Not only would you hit yourself, you would be written off as a stupid person. Instead, avoid an eye contact with the person. You can look around, watch others but when it comes to the person concerned, you overlook him/her. Turning a back won’t be a good idea as you would not be able to notice his/her reaction. Instead, have the person in your peripheral vision. This way, you will always be able to look at the person without him/her getting to know about it.

A Candid Moment! Just when the person thinks that you have written him/her off your diary or nothing can be renewed between the two of you, spare him/her a candid moment of togetherness. In moments like these, act normally and do something unusual that you haven’t done for a while, maybe calling him/her by name, or making an eye-to-eye contact or even passing off a generous smile. Whatever it is, leave it to being short and sweet or else the effect of it won’t stay long. These little thrills would make the person realise and make him/her come back to you for more. Also, this way, you’ll have an upper hand and not the other way round.

Focussed & Busy! Get focussed in your life and career and keep yourself busy, for it would not be easy to ignore someone, if you are thinking about him/her all the time. Get your life and career back on track and focus on things that you haven’t for quite some time. Also, taking up a newer activity or hobby would be a great way to go about it. When he/she finds that you have little or no time to spare and are busy in your own world, it will surely keep him/her wondering about what happened. As for you, you could accomplish your mission and enjoy the new hobby that you have taken up, all at the same time!